After a good few months of work, one or two technical problems and a girl in a lemon suit, it's finally here. From his brand new album Monsters described by Hot Press as "In your face contemporary indie… catchy and splendid” here is the video of the single Heads by the one and only HERM yeeeeayyy.

Herm Heads from Herm Videos on Vimeo.
We had great fun shooting this in Paper Lantern Studios. With a very small budget we were forced to improvise as much as possible. Here you can see our elaborate but affective steady cam (yes, I'm sitting on an exercise ball!). 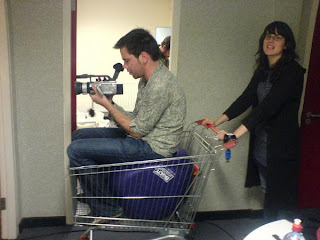 Anita Corcran and Simone Crowley did fantastic work in both set and costume design and all the animated parts too. Derek O'Rourke photographer extraordinaire helped out with lighting and got some great photos including this cool one of Herm. 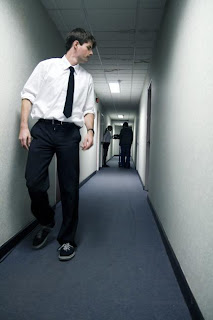 The very beautiful Isobel Henihan (fiancee extraordinaire) is responsible for make-up and some acting parts and helped me out considerably during the whole thing. Other credits include Sean Power (Cameraman), Rachel Quinn (Choreography), and also Hugh, Arunas, Keith, Cathal, Shane, Jackie and the 2 Pauls.

Feckin great job done there Ian and team. Big pats on the back to y'all!